In celebration of Allendale’s 125th Anniversary
the Allendale Historical Society will be presenting
their “Allendale – Now and Then” slideshow – originally created by Pat Wardell and presented by Joanne Hart.

7pm at the John Fell House.

Historical displays will be featured around the house.

No charge however donations to the John Fell House are welcome.

For more information about the Allendale Historical Society please visit their website at www.njallendalehistoricalsociety.com

Copies of the detailed history of Allendale in the book written for Allendale’s Centennial celebration  in 1994 by Pat Wardell “Allendale – the Background of a Borough” will be available for purchase. 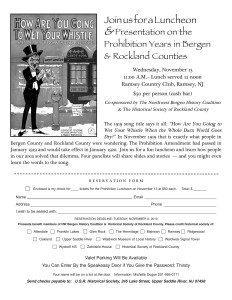 Please visit the Saddle River Youth Theater website for tickets, times and more details at www.sryt.info
Tickets can be purchased on their website under the tickets tab. 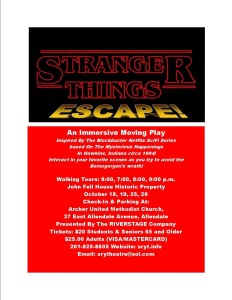 Please stop in to see “Local Maps” which will be the featured exhibit at the John Fell House. 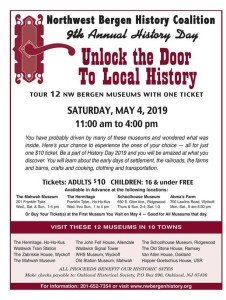 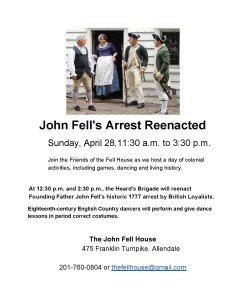 Join the Friends of the Fell House as we host a day of free  history and Earth Day oriented events.

At 12:30pm and 2:30pm the Heard’s Brigade will reenact John Fell’s historic arrest by the British Loyalists on April 22, 1777, and explain it’s significance. 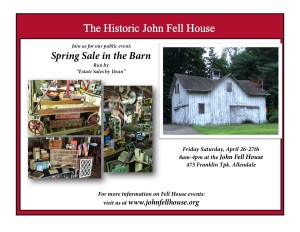 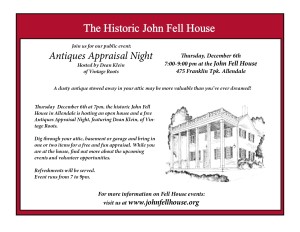 Dig through your attic, basement or garage and bring in one or two items for a free and fun appraisal. While you are there at the house, find out more about the upcoming events and volunteer opportunities.

Refreshments will be served.

A portion of the proceeds will go to the restoration of the John Fell House.

The Northwest Bergen History Coalition Invites you to:

Join us as noted author Elaine Weiss shares a moment in history that changed all of our lives. In 1920, after 70 years of struggle begun by Susan B. Anthony and Elizabeth Cady Stanton, the 19th Amendment to the Constitution granting women the right to vote was near to passing. The amendment had 35 ‘yes’ votes but needed one more. Tennessee was their last chance. That August brought a divergent group of suffragettes “Suffs” to Tennessee, a holdout state that could push the count to 36. They came to confront the “Antis” (women who feared the moral decay of the family and nation) and the Tennessee politicians who did not want women to influence the upcoming election.
Elaine Weiss brings together all the elements of this turbulent time in which ” the core themes of American history-race, class, money, gender, states’ rights, power and democracy -all came to play in Nashville.” Indeed, the original suffragettes for women’s rights had begun as abolitionists working to abolish slavery. Now, descending on Tennessee, later suffragettes- led by Carrie Chapman Catt, Sue White, and Alice Paul, who often differed among themselves, would be challenged by most men and by Josephine Pearson, proud leader of the Tennessee “Antis”.

Elaine Weiss is an award-winning journalist and writer. Her first book, Fruits of Victory:The Woman’s Land Army in the Great War was excerpted in Smithsonian Magazine online and featured on C-Span and public radio stations nationwide. Highly acclaimed by  the New York Times Sunday Book Review, The Woman’s Hour has  been optioned by Amblin TV for adaptation as either a TV movie or a limited series.

See the attached flier for details.